Our next port of call was Montevideo, Uruguay, which is 174 miles to the east of Buenos Aires.  When you look at a map, you think that a large bay separates Buenos Aires and Montevideo.  It is actually the the Rio de la Plata River.  At it’s source it is 1.2 miles wide and grows to 140 miles across as it enters the Atlantic Ocean. It averages 27 feet in depth and a constant flow of silt plagues the shipping traffic.  Who knew that for the first 2 days of our cruise we would be in fresh water.

We met our tour guide Gracelia and started off to explore the capitol city of Uruguay. We drove past an Anglican church.  Numerous European countries had an influence in the area, including English settlers that came and modernized the city bringing with them their religion.  The services are presented in English.

Our first stop was Plaza Independence, which has the Gateway of The Citadel.  It is one of the few remaining sections of the wall that surrounded Ciudad Vieja (Old City).  It was part of the citadel or fortress built in 1726.

In the center of the plaza is the Artigas Mausoleum.  It is a monument to Jose Artigas, known as the father of Uruguayan nationhood. The top of the mausoleum has a statue of Artigas riding a horse.  Our guide pointed out that the statue was placed there in 1977, but depicts a European horse, rather than a Uruguay horse.

The mausoleum is under the statue. It is a very solemn place.

The tomb is guarded by traditional guards known as Blandegues de Artigas.

Our next stop was the Uruguay Legislative Palace. The country is considered a representative democratic republic.  There are 13 ministers and the President that exercise the executive powers.  There are also 30 senators and 99 representatives. The building was completed in 1925. 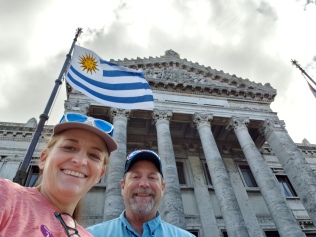 In the foyer, there are murals about Uruguay’s political history.

The building reminded us of a European church.

It contained many ornate details. 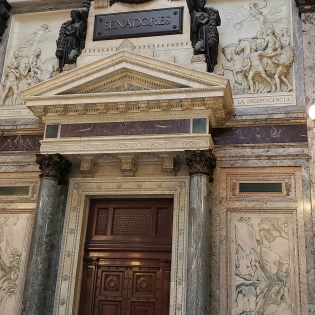 It also had stained glass windows.

The building had 52 different marbles inlaid into the columns and walls. 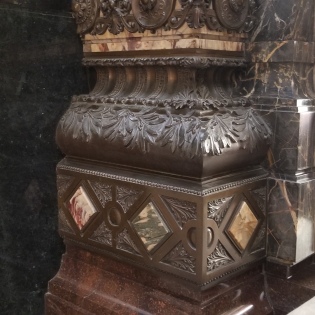 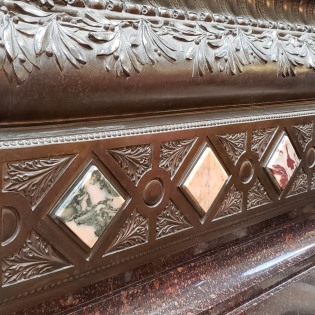 The country’s Declaration of Independence is on display.  The first Constitution was written in July of 1830. Soldiers stand guard over the document as well as the entrances to the various chambers.

The main industries in Uruguay are Cattle export (cattle out-number people), Soy beans, Eucalyptus pulp, and software production.  The software industry has made Uruguay and particularly Montevideo, one of the most prosperous areas in South America.

We drove past the Obelisk of Montevideo.  It is dedicated to the creators of the first Constitution.  It has 3 sides representing Law, Liberty, and Force.  It is 130 feet tall and was dedicated in 1938.

Our next stop was at  La Carreta which commemorates the early settlers of the area.  The monument could have been one that you found in the United States along the Oregon Trail. 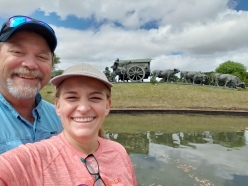 We then went to the most important building in Uruguay, Estadio Centenario, or Centenary Stadium.  It was built to host the first FIFA World Cup in 1930 and to commemorate the 100th anniversary of the first constitution.  The stadium has remained unchanged except with the addition of “padded” seats.

As we walked around the stadium, we were intrigued with the tower.

Interesting to look at the concession area…

Items from the Olympics…

And lots of trophies…it was kind of like going to the Football Hall of Fame in the United States.

The stadium has also hosted numerous concerts, which were high-lighted with several posters.

As we came out of the museum, we watched a road race that was occuring around the stadium, we clapped as they passed by.

Montevideo sits on the banks of the Rio de la Plata river.  It is still considered a river, but due to the tide, the water here is more salt water than fresh water.  The beaches have a beautiful white sand (note the beach volleyball court).  the area looks and feels like you are on the ocean, although the water is very brown due to the silt. The river is also the site of the first naval battle of World War II and the only one to take place in South America.  It involved ships from Germany, Britain, and New Zealand.

We made a brief stop at the Plaza de la Armada, which is a monument to fallen soldiers.

It had great views of the river.

On our way back to the ship we passed the Sofitel Montevideo Casino Carrasco & Spa.  When it opened in 1912, it was considered the largest hotel in South America.

We passed Castillo Pittamiglio, which was built in 1911 by Humberto Pittamiglio.  The interior is full of obscure symbols with deep meanings.  The outside looked pretty obscure too.

We asked to be dropped off at the market near the port.  We had heard about the incredible barbecue restaurants.  The barbecue was invented by Gauchos to cook meat while out on the range.  These have been incorporated into the Montevideo restaurants.

The port entrance is nicely designed with several features in tribute to the water aspect of Montevideo.

We very much enjoyed our time in Uruguay.  We now had a day “at sea” to relax.  We took advantage by watching movies, by the pool (as we go further south it was getting colder).

We enjoyed dinner in the dining room on formal night, as well as getting our picture taken. 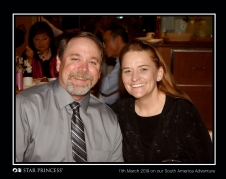 We also watched the singing and dancing show 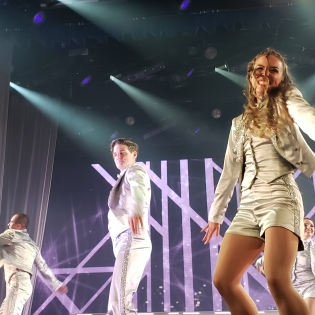 Next up is Puerto Madryn, Argentina…